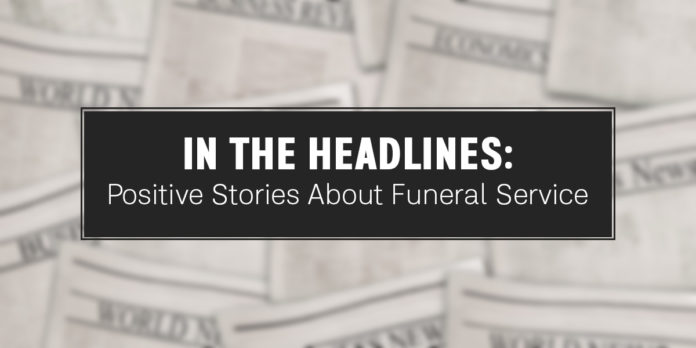 The news media and entertainment industries in America have taken every opportunity to misrepresent funeral service professionals.

Funeral professionals should be recognized in the same way we honor our community leaders. They are fulfilling an essential duty for humanity that most people are too fearful to even think about – while also extending themselves to the public far beyond what many people would feel comfortable doing.

For decades, funeral directors could do next to nothing about the disproportionate number of negative portrayals in the media. However, in recent years, the internet has created opportunities for directors to shatter stereotypes and escape from these sweeping generalizations by taking control of the message.

Creating an online campaign to support a local charity, going above and beyond to make a funeral service meaningful, or spreading the word about a holiday or grief education program are a few of the ways funeral directors can now act as their own spokesperson instead of relying upon the media.

In an effort to highlight the positive work of funeral directors and help tip the scales in the right direction, here is a roundup of funeral professionals who made headlines this month for good reasons.

This past March, nearly 100 people attended a funeral service for a man they had never met at Kenneth H. Pollard Funeral Home in Methuen, MA. The guests came to pay their respects to Army veteran Albert Corn after the funeral directors spread the word that the gentleman did not have any family members who could attend his services. The response was an incredible display of American patriotism that spoke volumes about the importance of paying tribute to our servicemen and women.

This wasn’t the first time a funeral director went above and beyond to ensure a hero received a proper send-off. Within the past several years, this scene has played out at funeral homes across the country as directors use the power of social media to spread the word to the community about veterans who pass away without any living family.

Just this week, Kenneth H. Pollard Funeral Home sent out another call to the public inviting them to attend the funeral service of U.S. Navy veteran Eileen Robichaud. The article details how funeral director Aaron Mizen, who is a military veteran himself, is passionate about advocating for veterans’ rights. In addition to his efforts in helping to arrange her services, Mizen also went to great lengths to tell Robichaud’s story —scouring military records and sparse documentation to write her obituary.

After losing their family patriarch, a family wanted to honor their loved one’s sense of humor and willingness to shirk convention. To pay tribute to this gentleman’s life, the funeral procession was led through the drive-thru of the local White Castle so everyone could enjoy a slider in his memory. The restaurant even put up a special message on their marquee.

Kudos to the directors at Frank E. Smith Funeral Home in Lancaster, OH, for helping to facilitate this personalized funeral tribute. We especially loved the part of the article that recounted the family’s surprise when they learned he made this special request when he prearranged his services with the funeral home.

If we could change one thing about the article, however, it would be to include a quote from the funeral director. We can’t help but feel curious about the conversation that must have taken place between the director and this gentleman when the prearrangements were being made. We’d also love to know more about how the funeral home coordinated this special last wish.

The impact of gun violence in the city of Baltimore is truly difficult to fathom. More than 500 people were shot during the first half of 2019 alone — marking a massive increase in gun violence incidents within the city. With homicides up 17%, funeral directors are being called more and more often to serve families who are dealing with unspeakable grief, shock, and anger after a loved one’s life is brutally and unexpectedly cut short.

For the professionals at March Funeral Home, which has locations in both east and west Baltimore, sitting on the sidelines of this issue is not an option. Recently, the funeral home partnered with local groups in organizing the Thou Shall Not Kill Anti-Violence Rally to raise awareness and create a sobering reminder of the toll that gun violence takes on a city.

The rally included a fleet of a dozen hearses that were driven by funeral professionals who stopped at several intersections to lead prayers and speak to news organizations about the need for change. This is the fourth year the rally has taken place and, according to Fox Baltimore, “Organizers say they will continue to do it as long as the need remains.”

It is a widely accepted fact that therapy dogs can offer both emotional and physical comfort to those suffering a loss. In recent years, an increased number of funeral professionals have adopted therapy dogs for their funeral homes because they recognize how interactions with dogs can provide solace to the bereaved.

This month, Cone Funeral Home in Bowling Green, KY, became the latest firm to welcome a comfort dog to their team. Tilly, a Goldendoodle puppy, is described by the Cone family as “an asset to the business” who “gives unconditional love” every time you pet her. The article goes on to detail the recent emergence of comfort dogs in funeral homes and why they are a natural fit.

“We’re trying to have a place that takes the stigma out of death. I truly want you to feel like you’re coming into my home,” said Funeral Director Kenneth Cone in the article.

Excess Death and the Future of Deathcare

Improve Your Business by Improving Your Service

In the Age of Information, Misinformation About Cremation Recycling Just Doesn’t...

Let the Law Protect You