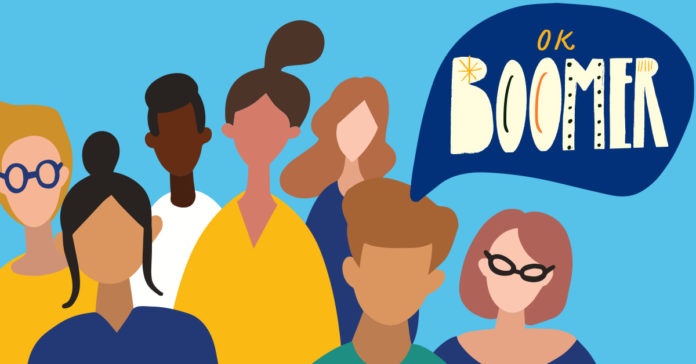 The now-popular “OK Boomer” meme was borne from Millennial and Gen X frustrations with the world as they have found it; and frankly, they are correct. It’s a mess, made worse for them by the national embarrassment of college loans. But that’s not what this article is about.

(Click here to learn more about the origins of the “OK Boomer” meme.)

Relative to the funeral business, what should we take from “OK Boomer”? What does it mean for the funeral industry as the largest generation in the history of the world enters their prime death years? These are some of my observations and predictions. Keep in mind: I am a Boomer.

The Boomers have been anything but consistent over our long life span. Boomers entered the world following World War II. All of our fathers were military, and the threat of another war has hung over our heads from the beginning.

Boomers were the first generation to challenge corporations, military involvement, women’s rights, racial equality, and the corporate war machine. On the other hand, we polluted our waters with plastic water bottles and became terribly materialistic. Our world views were distorted by our mothers reminding us of starving children in Africa every time they forced boiled lima beans or Brussels sprouts on us. (Just me?)

We played outside, and we were adventurous on our bikes. So, taking a risk without the thought of risk has been a lifelong trait. How else can we explain the drug epidemic? We didn’t get that from our parents.

We’ve been wasteful and exploited the environment – mostly from ignorance. We do what our parents did.

Boomers have always purchased from the middle in the good, better, best spectrum, which every manufacturer of every product known to man has taken advantage of – increase profits by raising the price of the middle.

Boomers are ambitious and made it a practice of relocating for career opportunities, which have left small towns even smaller and large cities much larger. In that same regard, we’re not particularly sentimental.

Boomers are and always have been competitive, which is why so many Boomers are entering their senior years with underfunded nest eggs. Instead of saving, they spent to keep up with the neighbors and suffered under the assumption that the government would take care of our senior needs.

Research studies of Boomers for the past 30 years regarding funerals have indicated that they want the event in their name to be a party.

Boomers will not be buying cemetery property; if they already own property, it’s just as likely to be listed on Craigslist or the newspaper classified ads. The Baby Boomers will be referred to as the generation that made cremation an acceptable form of disposal.

When they do bury, it will be with upright monuments, possibly with a product logo engraved in stone.

Boomers may say they’re religious, but there is little evidence of it. More often than not, their beliefs are more cultural than religious. Religion in the cities is eschewed, and in the rural communities, it’s simply the accepted practice. Nonetheless, religion in our funerals will be secondary to self-acknowledgment.

Boomers failed to invest in life insurance, so who’s paying for the funerals?

Boomers have started to die in relatively large numbers – larger than deathcare acknowledges. There will be a tipping point year with a large number of Boomer deaths; but as of now, we are keeping the funeral industry relatively busy.

So, what does all of this mean?

Casket and vault sales will be less common, but food sales, music, and even funeral DJs will become common.

Contrary to past generations, funerals will be self-funded, so there will be a cap on costs.

Because funerals will be more funded, they will be better attended than in the past, which will be very good for the deathcare industry as the funeral product is transitioned.

Pre-need sales will begin to demonstrate the “self-acknowledgment” factor. Look for large portraits printed from a website at our funerals.

Funeral events will be themed around the deceased’s beliefs and attended by those in agreement. Look for funeral homes to invest in security as funeral events can and will attract dissenters.

Cemetery grave sales will continue to decline, but niche sales could develop quickly with the introduction of technology. Make the niche a screen with videos of the deceased, family, friends, etc. Make it personal.

If they have not already, memorial gardens will have to introduce gardens for upright monuments.

Look for burial in national cemeteries to significantly increase. Many veterans and their families preferring burial will take advantage of their military benefits. Commercial cemeteries would do well to lobby the federal government to allow for veteran funerals on their property.

Excess Death and the Future of Deathcare

FEMA Provided Updates to the Media. We Were on the Call,...

Acknowledging The Potential for Holiday Blues: Practical Tips to Survive and...