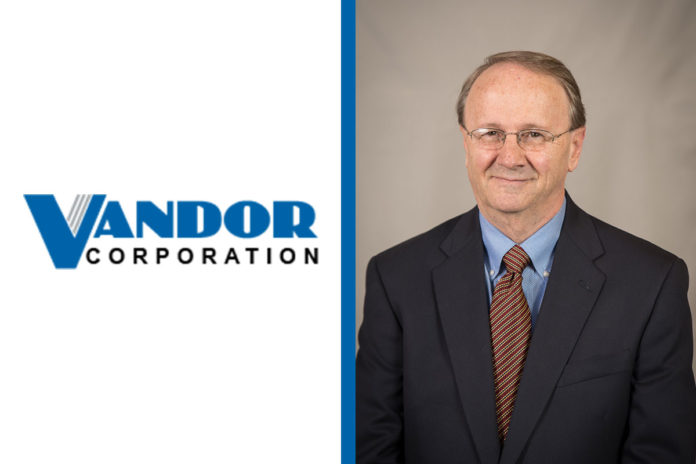 RICHMOND, IN — On behalf of Vandor Group, Alan Elder, Chairman/CEO, announces the planned March 31, 2021 retirement of Gerald Davis as its President and affirms his continuing service as an important shareholding board member. Gerald will also continue as a consultant focused on new products, research and design, and special projects.  Concurrent with Gerald’s retirement, Vandor’s shareholders are expanding its board size looking to grow with a next generation of leaders including two of Gerald’s children: Adrienne Cowen and Justin Davis.

As President of Vandor since 2000 and with over fifty career utility patents so far, Gerald’s funeral industry, and reel and cable industry packaging innovations and improvements are just part of this story. And so it is with delight that we here tell you more.

Gerald started his career in the funeral industry as a part-time assembly line employee in the summer of 1977 at Spartan Casket Shell, Lynn, IN and was quickly promoted to Purchasing Manager and later Plant Superintendent. In the mid-nineteen eighties Gerald took a position with America’s oldest casket company JM Hutton in Richmond, IN followed by an opportunity to work closely with an innovative funeral home buying cooperative focused on Texas and Michigan. In 1989, starting with the Elderlite Corrugated Fiberboard Casket and working closely with the Elder family founded Elder Davis, Inc. which quickly grew to become the largest cloth covered burial and cremation casket manufacturer in North America. Gerald continued with its new owner when Elder Davis was sold in 1997. These experiences prepared Gerald for leading Vandor to anticipate North America’s yearning for ever better cremation products by creating Starmark Cremation Products in 2004.

Gerald enjoys being an outlier and leading the Vandor R&D team to constantly develop new and useful high eye appeal products at reduced costs that can be sold in very high volumes and meet if not exceed customers’ expectations. Several recent examples stand out as noteworthy. When Starmark launched the Transporter Cremation Container in the mid-2000s it was at first ignored by many in the funeral industry as unneeded and unwanted. Gerald’s consistent reply was “that funeral professionals just don’t know they need them yet and once they try them they will see how good they are”. Vindicated, the Transporter has become the highest volume cremation container sold in the USA that includes an interior.  When this R&D team created the patented injection molded plastic Sure~Lock Cremation Urn, it soon grew to be the highest volume urn sold in North America. Gerald’s team also created ceremonial rental caskets that are wider, longer, deeper, and include a crank adjustable bed and easily replaced interior head panels. This team also created compact designed ceremonial rental casket inserts that require less space, lowest shipping costs, and high functionality for all North American funeral homes. Today, Starmark is the largest volume producer of ceremonial rental inserts for all brands in the USA. Most recently Gerald and the Starmark team launched the Artisan Series Cremation Container products and all signs lead to sustained record breaking annual sales growth.

Gerald comes from a family of casket builders as his father Forrest Davis founded Goliath Casket in the mid-eighties which continued for nearly four decades under the ownership of Gerald’s brother, Keith Davis.  Among his many talents, Gerald is a one-time professional musician who majored in Alto Saxophone at Ball State University and Fort Wayne Bible College (now Taylor University). Gerald met his wife Annette while serving in the US Army as a music director/arranger in Germany.

In retirement Gerald plans to catch up on music skills and spend more time at home with his wife of nearly 47 years. With their four married children, eight grandchildren and one great-grandchild there is plenty to keep them busy. His newest toy, a John Deere tractor, will transport him back to his younger farmer roots.

All of the Vandor team wish Gerald and Annette the greatest joy and know he will never stop contributing to the ongoing success of its customers.

FEMA Is Now Accepting Applications for Funeral Assistance: Here’s What You...