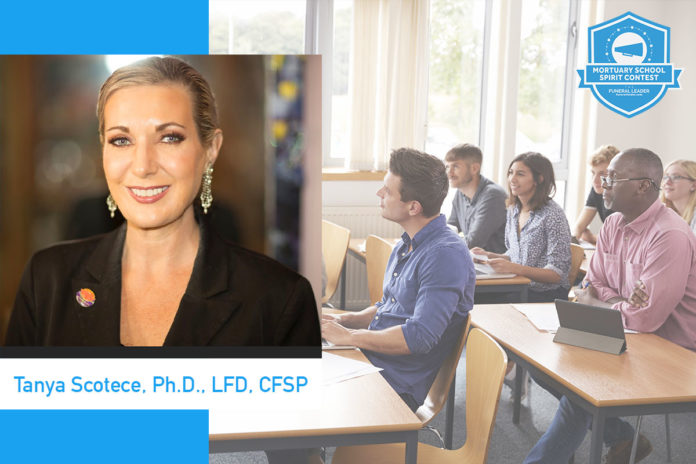 In connection with our first-ever Mortuary School Spirit Contest, we spoke with Tanya Scotece, Ph.D., who is a licensed funeral director and a professor at Miami Dade College. She shared details on her teaching philosophy, why she became a mort school professor, and how she prepares her students for life after school.

Scotece, who is a first-generation funeral director, traces her first experience with funeral service back to her childhood.

“It all started with a chandelier. When I was 12 years old, I went to my first wake, and I was fascinated by these men in black with these beautiful chandeliers above me. It was a mesmerizing moment for me,” she said.

Scotece worked at a medical office out of high school until her early 30s, then began managing the practice of a surgeon treating breast cancer, thyroid, and malignant melanoma. It was during this time that she learned how to console people at some of the worst times in their lives while explaining what options they had to move forward.

“Life put me on a detour, but when I was 35, I called a local funeral home out of the blue to see what they did, and I found out about mortuary school. By the end of the afternoon, I was signed up for my first class,” she said.

Because of her experience as an adult in higher education, Scotece has a deep awareness that all of her students don’t learn the same way. Her goal is to incorporate many different learning styles, including lectures, discussions, activities, and presentations.

“I incorporate all the different learning styles and that prepares them for the actual world of a funeral home because we don’t know what to expect. I bring the classroom to life — that’s what they tell me,” Scotece said.

Scotece does her best as an educator to share her experiences with students but also invites guests to speak about their expertise. She feels it’s important to give her students top-notch resources to turn to and learn from so they can become well-rounded funeral directors.

“I only have the capacity to share with them my experience, my knowledge, and my expertise. I get the best of the best in the profession to come in as guest speakers so they can hear right from the people that are involved,” she said.

Another reason why Scotece wants to give her students access to great resources is that she wants them to go above and beyond for families.

“I don’t want them to be a bottom-feeder funeral director. Anybody can take a death certificate order, anybody can show somebody an urn, but that’s not funeral directing. This is a lifestyle — it’s not just a job,” Scotece said. “I want them to live their calling and be their best everywhere — not just in the funeral home.”

To this day, Scotece wears large earrings so she can take the “chandeliers” with her everywhere she goes as a reminder of the moment that called her into funeral service so many years ago.

Has your life been substantially impacted by a mortuary school professor? Share your story with us by emailing us at [email protected].

Grief Is Not a Disorder: My Position on the New “Prolonged...

Beyond Green: What is Fair Trade and Why Should You Care?