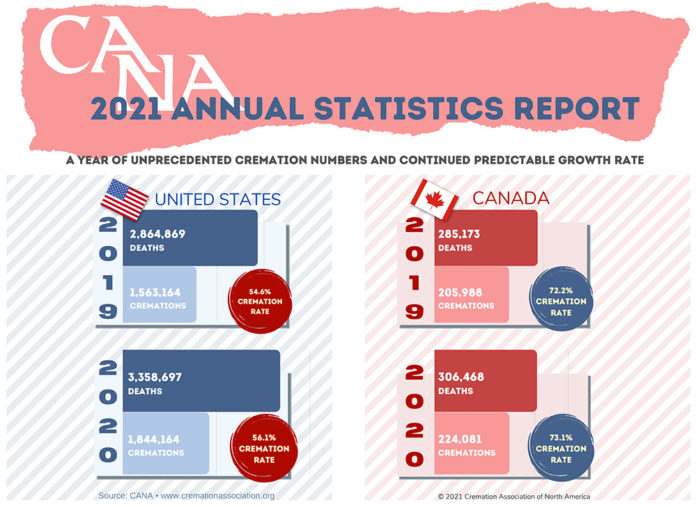 WHEELING, IL — The Cremation Association of North America (CANA) has just released its latest Annual Statistics Report featuring final 2019 cremation data, newly released 2020 data, and projections to 2025 and 2030. The report contradicts anecdotal predictions that the cremation rate surged during the pandemic, demonstrating instead that it followed a predictable trend.

CANA is committed to gathering accurate and comprehensive cremation statistics to serve the needs of the death care industry and consumers. In collecting 2020 data, the association obtained figures from state and provincial governments in the United States and Canada. Where information could not be provided, CANA’s statistics consultant conducted a regression analysis to develop five projection models based on more than 20 years of data. Projected cremation rates reported are an average of this analysis. CANA’s Annual Report on cremation is regarded as the most reliable and current available today.

2020 — A YEAR OF UNPRECEDENTED CREMATION NUMBERS AND PREDICTABLE GROWTH RATE

In the Annual Report, CANA announces that the 2020 U.S. cremation rate of 56.1% was an increase of 1.5% over the 2019 rate of 54.6%. This is well within the rate as previously anticipated by the association. Over the past 50 years, CANA statisticians have seen cremation rates follow a predictable growth curve, and 2020 was no different. Hypotheses that the cremation rate would spike in response to social distancing and increased deaths does not hold true.

“If you are a funeral home or crematory operator you should take a good look at the data,” recommended Thomas J. Anderson of Funeral Director Daily. “Many of us thought that the anecdotal information we were getting from the Covid-19 pandemic would lead to a fast ramp-up of cremation dispositions. Looking at CANA’s report, it appears that did not happen, and you should take that into consideration when working on your future budgets.”

CANA predicts that the steady growth rate will continue, with cremation averaging roughly 1.5% nationally each year and varying in state and local markets. Past reports looked in-depth at when cremation reaches a tipping point and growth increases quickly, and when the rate begins to plateau. In 2025, CANA predicts the U.S. cremation rate will reach 65.2% and 72.8% in 2030. In Canada, where the cremation rate grows an average of 1.1%, 2025 is predicted at 76.8%.

The association’s statistics consultant believes that we can anticipate lower death and cremation numbers over the coming years—because many of the additional 2020 deaths were premature—but that the cremation rate will continue to follow predicted trends. As CANA has noted in prior years, only new consumer preferences, such as body donation and green burial, are likely to impact cremation growth regionally or nationally.

ABOUT CANA RESEARCH
The Cremation Association of North America (CANA) has been tracking national cremation statistics in the U.S. and Canada since our founding in 1913. Based on this data, CANA creates annual statistics reports to document consumer preferences and measure the steady growth of cremation rates across North America. CANA Research is often used by the media to shape their articles and by CANA’s members to guide their future business plans. For more information on CANA’s statistics, visit https://www.cremationassociation.org/IndustryStatistics.

CANA Members can read the full report in the most recent edition of The Cremationist or log in to https://www.cremationassociation.org/CremationistMagazine.

ABOUT CANA
Founded in 1913, the Cremation Association of North America (CANA) is an international organization of over 3,300 members, composed of funeral homes, cemeteries, crematories, industry suppliers, and consultants. CANA members believe that cremation is preparation for memorialization.

Dr. Wolfelt’s Advice for Families Grieving Amid the Holidays and Pandemic

‘OK Boomer’ – What Funeral Directors Can Learn from This Viral...