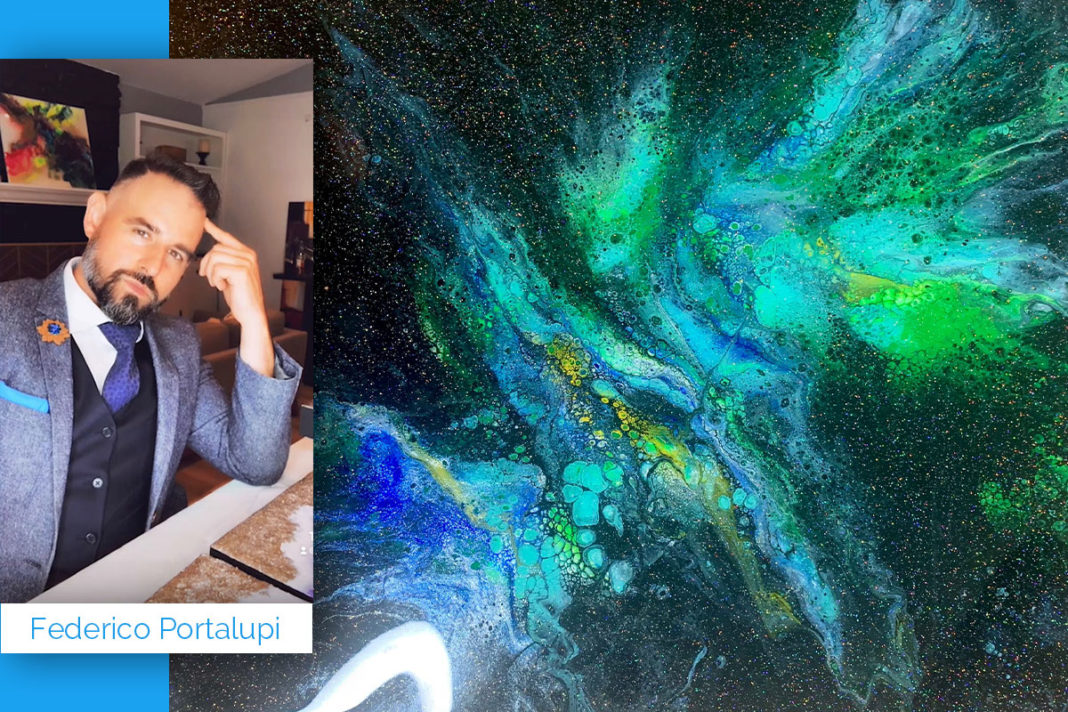 Federico Portalupi was 13 years into a sales career at the largest mattress company in America when it hit him: He was not living the life he wanted to live.

In 2004, Federico decided to pursue art. Sixteen years later, the world shut down due to COVID-19, and people were spending more time at home than ever before.

They also spent more time on their mobile devices, prompting the video-sharing social networking app TikTok to skyrocket as one of the fastest-growing brands of 2020. Federico, like many other artists and entrepreneurs, jumped on the bandwagon and began marketing his artwork through the app.

But unlike many of the other artists on TikTok, Federico uses cremated remains.

In the beginning, his work was only made using paint, resin, and air on birchwood panels. His following grew as consumers appreciated the nebulas and ocean scenes he created. Then, one day, one of his followers messaged him. She shared about her husband’s brother who had passed away recently. She was hoping he would branch out to create a piece utilizing his cremated remains. Federico immediately said yes.

To some, this jump might seem drastic, but it made sense to him. Federico says he actively pursues change and enjoys confronting new challenges. Working with cremated remains opened the door to a different level of reverence and intention with his art, allowing him to give back to his audience. He says that each piece, which he calls a memorial, involves some sort of “transfer of energy” or “shared awareness.”

Federico takes his time to perfect each piece and create the most respectful and personalized memorial of each customer’s loved one, which he says is life-giving to him.

The reaction online has been largely positive. The only criticism has come from devoutly religious people who don’t support cremation, and even some of them respect his process and care. He says many people of varying ages and backgrounds have expressed their support.

His TikTok following has grown to 361,000 in about a year; it grew exponentially since he started creating art with cremated remains. His first piece of this kind was created about seven months ago, and now, he is overwhelmed with requests.

This is partly due to the time and space it takes to create a piece. Whenever he accepts an order, he asks for pictures, stories, a letter, or something similar so that he can get a grasp on who this person was. He wants to incorporate their essence in the piece, and he likes to share about them and his process in a series of videos on TikTok, so that his followers can have a full experience.

In his videos, you can see that he cares for the loved one by wearing gloves, ensuring there is no waste, and making each piece unique. He also complies with specific requests, whether it’s using a certain color or layout, but he usually sticks to nebulas and oceans as the base concept. This allows for the right balance of guaranteed quality and freedom to create.

Federico’s work is undoubtedly special. When asked about why people would prefer this as opposed to urns, jewelry, or another more common keepsake, he said his work is a constant, beautiful reminder of each person and who they were.

As he looks toward the future, Federico sees a lot of potential. Every day, he makes more connections with people who are interested in him and his work. He also maintains relationships with clients, ensuring they are happy with their pieces. The first customer to request a piece made with a loved one’s cremated remains visited Austin, where Federico is based, and she came over for dinner.

Federico hopes he can continue doing this work and growing his audience. To check out more of his work or connect with Federico, you can find him on Instagram, Etsy, and TikTok.

Media Changes, But the Message Stays the Same

Arrangements Are Going Virtual: Here’s Why and What You Need to...