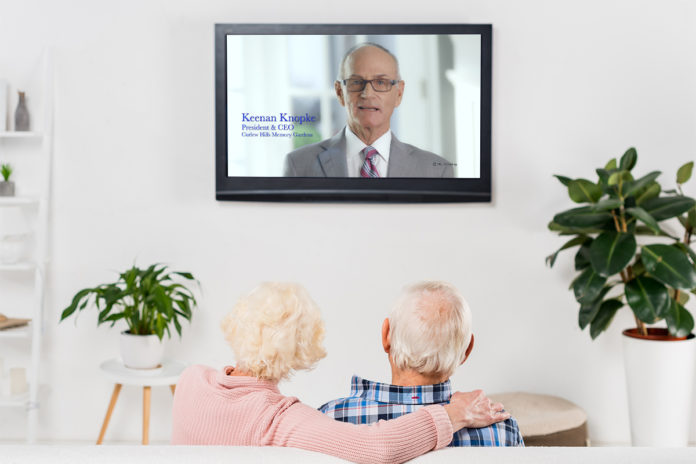 Television is one of the most powerful branding tools, especially when it’s used in conjunction with an overall marketing strategy.

But there’s a new element to TV advertising you might not understand or know about yet — and it’s more efficient and less costly.

OTT, or over-the-top, refers to TV media content that is offered directly to consumers via the Internet through streaming services. Viewers don’t need to subscribe to a traditional cable or satellite provider to be able to watch OTT. You view these types of ads through the many streaming services that are household names, including Roku, Hulu, Netflix, Amazon Prime, and Disney+. Nowadays, almost any channel on cable TV offers its own streaming platform for viewers to access their shows, movies, special/unreleased content, and more — all on demand.

Since its inception, streaming content has exponentially increased in popularity. In contrast, traditional television has steadily decreased in recent years across all ages as shown in the graph below.

The target demographic for the deathcare industry is a distinct segment, often valuing more traditional interests and less technology usage. Yet, if we look at how people ages 65-plus were consuming television last year, we see a growing interest in OTT. As we look at younger age groups, they consume OTT through streaming services more than they do through traditional cable TV.

In addition, OTT presents more assurance of reaching an advertiser’s intended audience. With traditional TV, the advertiser pays for an ad placement (network and timeframe) and is charged when that ad runs, regardless of whether anyone saw it. OTT advertisers pay per impression or ad view. This means the advertiser only pays if someone actually sees the ad. And the average OTT ad costs $30 to $40 CPM (cost per 1,000 impressions).

OTT advertisements provide real-time reporting and data, which allow the advertiser to develop a greater understanding of their audience and to tailor the ads to the most accurate demographic. These ads are also often non-skippable and customizable, so video completion rates are extremely high (over 90%). All of this is proven to increase engagement.

OTT advertising provides attribution tracking, which gives advertisers the ability to connect viewing an ad with the completion of an intended action (i.e., visiting the website). When consumers view an ad, advertisers can track online and offline behavior, which furthers their understanding of the demographic and the efficacy of their advertisements. Advertisers can drill down into the data to determine the completion rates of their ads in specific areas, learning more about the networks and devices that were used.

In mid-March, MKJ Marketing initiated an OTT advertising campaign for Krause Funeral Homes and Cremation Service, Inc. Within the first month, Krause’s ads received 50,100 impressions. Of those impressions, there were 48,560 completions, which is a completion rate of 96.9%. This campaign was very successful. But even more importantly, it wasn’t too expensive — the total cost for the month was $2,500.

Since OTT advertising is a relatively new approach, many providers are offering discounts to help companies better understand the process and benefits.

Another MKJ client, Cavanagh Family Funeral Homes, Inc., launched an OTT campaign in the Media, PA, area in April. That month alone, Cavanagh’s OTT ads were viewed 31,302 times. Again, the video completion rate for all three ads was nearly 97%. The best-performing ad, with a completion rate above 97%, was the Cremation With Confidence™ “Walk Away” ad, which Cavanagh also utilizes in Traditional TV advertising and in various forms in other digital marketing. (MKJ Marketing also has several new TV spots that are available for personalization — reach out to us for a demo and to see the new ads.)

The transition is already happening. OTT is the future of television advertising, and you’ll want to get on board before it’s too late.

Interested in learning more about developing an OTT advertising campaign or creating a personalized marketing strategy? Don’t hesitate to contact MKJ Marketing for a free consultation.

Leader Links: 10 Facts You May Not Know About Congressional Cemetery