Home Business NFDA Convention: Funeral Directors from Across the Country Reunite in Nashville 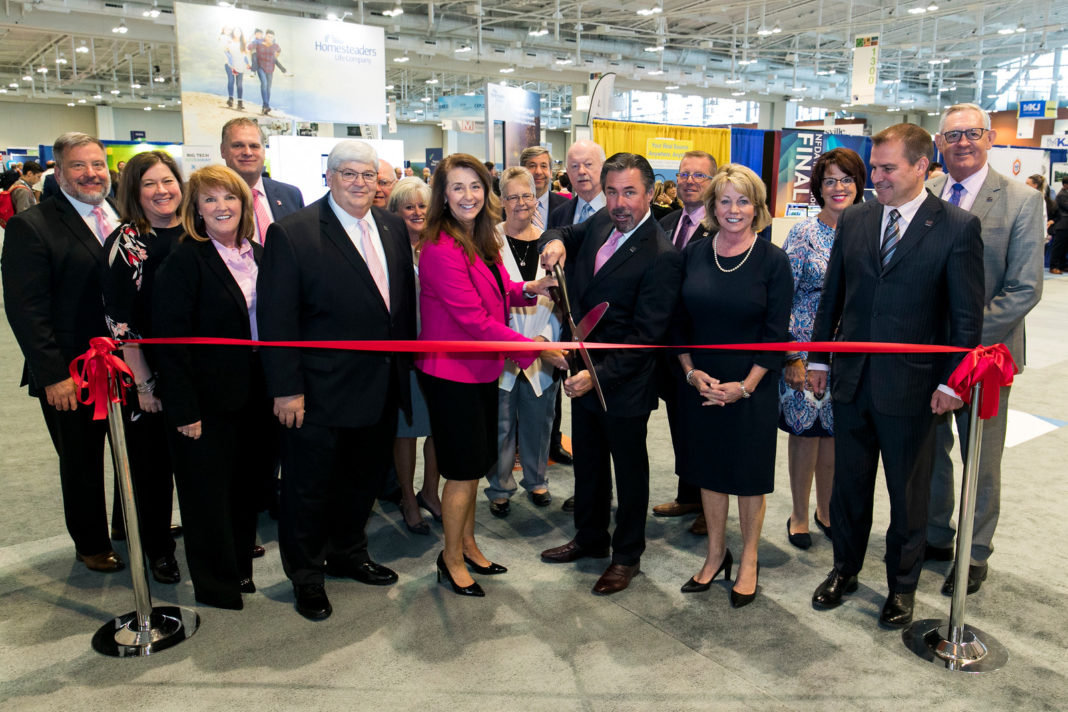 When Bryant Hightower started his term as president of the National Funeral Directors Association in 2019, there is no way he could have predicted what was to come during his term.

“Once you’re installed as president, you think you know what you may face in the upcoming year, and you pretty much have your year laid out … then, all of a sudden, a pandemic happens, and we had to switch gears,” Hightower said. “I was extremely proud, not only of our board, for adapting to the changes, but to Christine and the staff. We put together a virtual convention in a matter of months.”

While the 2020 NFDA International Convention & Expo took place in a virtual format, 2021 was the time for funeral directors, vendors, and deathcare professionals to gather in person at Nashville’s Music City Center from Oct. 17 to 20.

NFDA CEO Christine Pepper said over 90% of all attendees and exhibitors at NFDA were vaccinated against COVID-19.

Funeral directors from across the country reunited, and Hightower said it was incredible.

“While we’ve come in contact with families for the past 18 months, we’ve lost touch with our colleagues,” he said. “They’ll return home invigorated and excited to go back to work. We’ve worked more in the past 20 months than we have any time in my 40-year career, and I think we needed this socialization, and we needed to recharge our batteries.”

Hightower explained how much of a relief it was to be around fellow funeral directors after the trauma everyone in the profession experienced over the past 20 months. He said his friends outside of the industry just don’t get it.

“If you’re not able to talk to your colleagues, who do you talk to about it? Because nobody else really relates to it,” he said. “[Funeral directors] couldn’t do their work from home. They couldn’t go home and self-isolate. They go into work every day to help with the dangers associated with the pandemic, continuing to serve families. They did what they needed to do to care for the dead and serve the living. We’ve done that every day. I think that’s the thing that goes untold about funeral service. We’ve all said we’re the last responders. I don’t know if that’s really true because we’ve been resources to families every step of the way.”

A hot topic for many attendees and professionals at the convention was the ongoing staffing issues affecting funeral homes across the country. NFDA leaders stressed the importance of programs like Journey to Serve and NFDA’s Career Day kit.

Members of the media asked NFDA leaders about their role in trying to change state laws to offer more dual licenses.

“I think our job is to develop model laws that would allow them to adopt best practices, and quite frankly, laws that would allow for reciprocity and endorsement across state lines. Right now, so many of those laws really constrict our ability to either license for reciprocity or endorsement,” Hightower said. “I’ve talked to funeral directors across this country, some of which have 70 and 80 percent cremation rates who will tell me, ‘I don’t need more embalmers. I need more funeral directors,’ and I think we have to be realistic in the educational experiences that we offer these people.”

Currently, companies in all industries are experiencing supply chain issues. Incoming NFDA President Randy Anderson said he’s experienced a delay in obtaining certain caskets, noting that shipping and transportation times have both been slower. Bryant said manufacturers have made substitutions for his firm from time to time, but they almost always provide an item of equal or greater value.

Both Anderson and Hightower agreed that the biggest supply chain issue they’ve encountered during the pandemic was the extreme need for PPE in 2020.

“I think that taught us all a lesson. Whereas before, most funeral homes might have stocked for a 30-day supply because you didn’t have room to store all those supplies, and why spend all the money when you didn’t have to, to keep all those things on hand? Now, we stock six months of supplies, and we guard against that kind of supply chain issue … because we’re simply not going to put our boys at risk,” Hightower said.

Throughout the pandemic, many funeral directors have helped families access FEMA’s financial assistance program, which has provided over $1 billion in aid.

Anderson said the biggest complaints he’s heard about the program come from families who had prepaid arrangements and were not eligible for financial assistance. However, he feels it has been a well-streamlined process overall, noting that the customer service on the hotline has improved over time.

“It has been helpful to many families that I served because this death was really unexpected, and they were able to do more of the memorialization that they wanted to do because they knew that they would be reimbursed for it,” Anderson said.

When asked if he believes the dangers of the pandemic could potentially deter future employees from entering the profession, Hightower said he is hopeful there will be an uptick instead.

“It’s done a lot to highlight what we do, which may, in turn, bring people into this industry and profession, which is what we all want to see. There have been more positive articles written about funeral service in the last two years than any decade I can remember in the past. I think the importance of what we do has been highlighted over the last 20 or so months, and I think we’ve been painted with a pretty favorable brush in most media markets,” he said.

NFDA Convention: Funeral Directors from Across the Country Reunite in Nashville

‘Tell Me How to Grieve’: Thoughts on Leaning on Ceremony After...