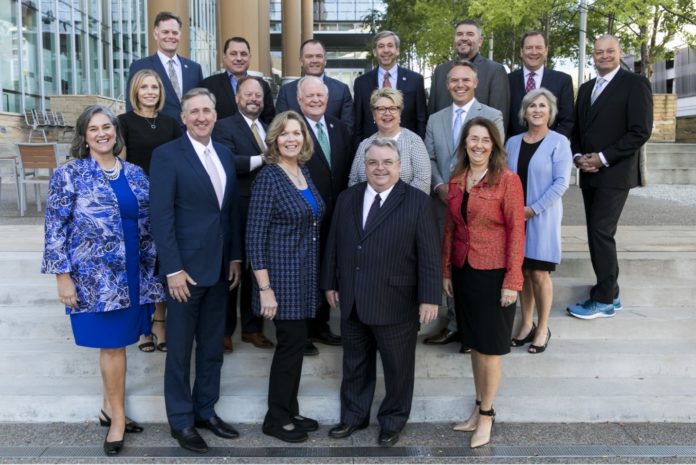 Voted onto the board in August, Matt Outcalt, Jenn Parvin, and Jeff Smith began three-year terms as Foundation Trustees on October 16.

Funeral directors and allied professionals alike serve on the 16-member volunteer board and offer their expertise and insight to advance to Foundation’s mission of investing in people and programs to strengthen funeral service and lift up grieving communities. Funeral service professionals and organizations throughout the United States and Canada benefit from the Foundation’s scholarship and grant programs, and free community and professional resources.

“Our newly elected trustees bring enthusiasm, expertise and fresh perspectives to the Foundation’s volunteer board,” said Funeral Service Foundation Executive Director Lee Wiensch, CFRE. “In their short time on the board, it’s evident that Matt, Jenn and Jeff value the collaborative and respectful spirit that helps the Foundation’s board succeed. They’re not afraid to ask tough questions and they’re ready to get to work.”

“Over the years I have come to understand how vital the Foundation’s mission is to the work we do every day to support grieving families and communities,” said Outcalt, Director of Business Development for Global Atlantic Financial Group in Batesville, Indiana. “Funeral service wasn’t my original path but is has become my calling. I look forward to helping the Foundation meet the needs of our profession, and building further awareness of the Foundation’s resources, grants and scholarships to make our profession even stronger.”

“I have a deep appreciation and respect for funeral directors, so it is a real privilege to serve on the Funeral Service Foundation Board and continue the great work that is being done to lift up grieving families and empower funeral professionals,” said Parvin, Vice President of Marketing & Technology for Batesville in Batesville, Indiana. “I am excited to lend my support to this distinguished team and carry forward Batesville’s enduring relationship with the Foundation.”

“I believe in the power of servant leadership and serving on the Funeral Service Foundation board is a meaningful way to give back to the profession,” said Smith, President of Smith Family Funeral Homes in North Little Rock, Arkansas. “As a third-generation funeral home owner, I am strong supporter of the Funeral Service Foundation and NFDA. The future of funeral service is only as strong as the national organizations that support local ownership. Over the years, many peers I respect have given of their talents and time to the Foundation, and I am honored to follow in their footsteps.”

In addition to welcoming new trustees, the Foundation’s board elected its executive committee. Allan Cole, President and Owner of MacKinnon & Bowes in Toronto was elected as the Foundation’s first-ever Chair from outside the United States.

“I am delighted and so very honoured to serve as the Funeral Service Foundation’s first-ever international Chair with this distinguished group of colleagues,” said Cole. “The Foundation has been so important to funeral service for four generations, and I have the utmost respect for the leaders who got us where we are today.”

In the late 1970’s, Cole attended classes offered by the National Foundation of Funeral Service (the name by which the Funeral Service Foundation was recognized from 1945 until 1997) and was first elected to the Foundation’s board in 2017. “I take this role very seriously, and will do my best to lead with integrity, transparency, and respect for my colleagues on the Board of Trustees and within the bereavement sector,” said Cole. “I promise I will work hard to carry forward our mission of investing in the people and programs to strengthen funeral service and lift up grieving communities.”

The Board of Trustees also elected Lisa Baue, former President and CEO of Baue Funeral Homes in St. Charles, Missouri as Chair-elect, and re-elected Eric Tanzberger, Senior Vice President and CFO of Service Corporation International in Houston, as Treasurer.

Christopher Robinson, Vice President and General Manager of Robinson Funeral Home in Easley, North Carolina, continues his service as the NFDA Liaison, an NFDA Board-appointed role. Anthony Guerra, Vice President of Guerra Gutierrez Mortuaries in Los Angeles, transitioned off the board after seven years of dedicated service having held the roles of Grants Committee Chair, Chair-elect and Chair. During the coming year, he will continue his service on the Executive Committee as Immediate Past Chair.

Kelly Milberger, Senior Vice President of National Sales for Global Atlantic Financial Group, Batesville, Indiana, concluded a three-year term of the Board of Trustees, and served on the Grants Committee. J. Mark Busch, former Co-owner and Funeral Director at Busch Funeral and Crematory Services in Cleveland, Ohio, concluded four years of Board service, and served as the Fund Development Committee Chair since 2020. Chris Trainor, President & CEO of Batesville in Batesville, Indiana concluded his second three-year term and served on the Grants Committee.

About the Funeral Service Foundation – FuneralServiceFoundation.org

Since 1945, the Funeral Service Foundation has served as the philanthropic voice of the funeral profession and has identified as the charitable arm of the National Funeral Directors Association since 1997. Donors and volunteer leaders profession-wide support the Foundation in its mission of investing in people and programs to strengthen funeral service and lift up grieving communities.

Geofencing: More Targeted Marketing Than Ever Before