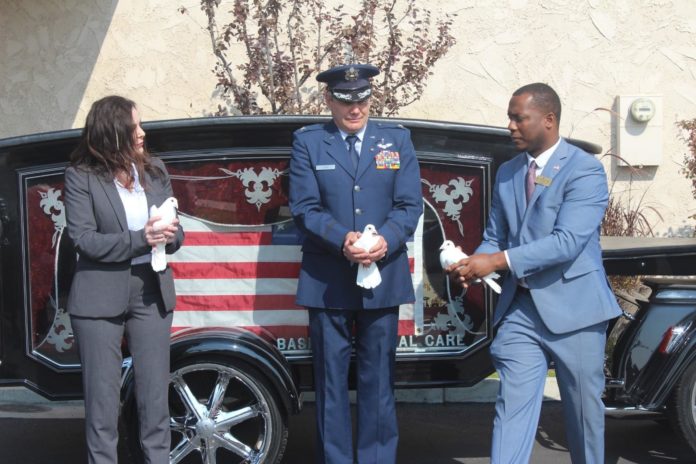 BAKERSFIELD, CA — Basham Funeral Care, a Bakersfield CA funeral operation with four locations, was honored to conduct a memorial service for Corporal Hunter Lopez of Indio, CA. Corporal Lopez was one of the 13 U.S. service members killed in the terrorist attack at the Kabul airport in Afghanistan on August 26. The service was held on October 29, at Basham’s Niles Street facility.

“The funeral profession cares for families, including extended families and friends that have lost a loved one. The sister of John Basham, former owner of Basham Funeral Care, has worked for years with Corporal Lopez’s parents at the sheriff’s office,” commented Eddie Pena, General Manager at Basham Funeral Care. “Although the communities of Indio and Bakersfield are more than 200 miles apart, we are privileged to honor the memory of Corporal Lopez and the twelve other service members killed in the terrorist attack with this memorial service and online donation portal.”

The memorial service was conducted at the funeral home by Colonel Wes Clare, a retired state chaplain for the California National Guard and veteran of Desert Storm. In addition to Corporal Lopez, the twelve other service members killed in the terrorist attack were honored at the service. Following the service, a bagpiper played the “Marine Corps Hymn” before 13 white doves were released into the air outside the funeral home.

“Anthem Partners respects the unique history of each of its funeral homes and instructs all locations to build on their legacy,” commented Will Andrews, president of Anthem Partners. “Conducting this service for Corporal Lopez and collecting donations for the deputy relief fund reinforces our mantra – ‘Anthem Partners is Where Legacy Lives.’”

Anthem Partners is a privately-owned operator of cemeteries and funeral homes. Founded by a group of industry professionals and backed by long-term, patient investors, Anthem Partners is actively seeking opportunities to grow with like-minded professionals and firms who share their vision. Respecting the unique history of the family businesses and acknowledging the lives lived in the communities that they serve are the founding principles of Anthem Partners. To learn more, call 972.418.2908 or visit anthempartners.com.