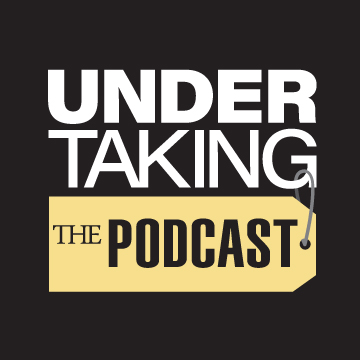 In late October, Undertaking: The Podcast crossed the 300-episode mark. Since it began three years ago, the show has become popular both in the United States and internationally. Regular listeners in over 50 countries have streamed or downloaded the podcast over 500,000 times.

In the fall of 2018, Indiana funeral directors and embalmers Ryan Ballard and Brian Waters started the podcast to tell the story of funeral service from the inside. “Funeral service can be a lonely profession because many of us work in relative solitude,” explained Brian Waters.

“This podcast began as a way to connect funeral directors as a wider community,” said Ryan Ballard. “But it’s also become a way for consumers to learn more about the services their local funeral home provides to the community.”

Undertaking: The Podcast tells the story of funeral service through the eyes of funeral directors themselves. In new episodes released every Tuesday and Friday, the hosts share the struggles common to funeral directors across the globe, while also highlighting the stories of those who have experienced the death of a loved one.

Listen to Undertaking: The Podcast on Apple Podcasts, Spotify, or wherever you get your podcasts.

Honoring Those We Have Lost: Paying Tribute to Funeral Professionals