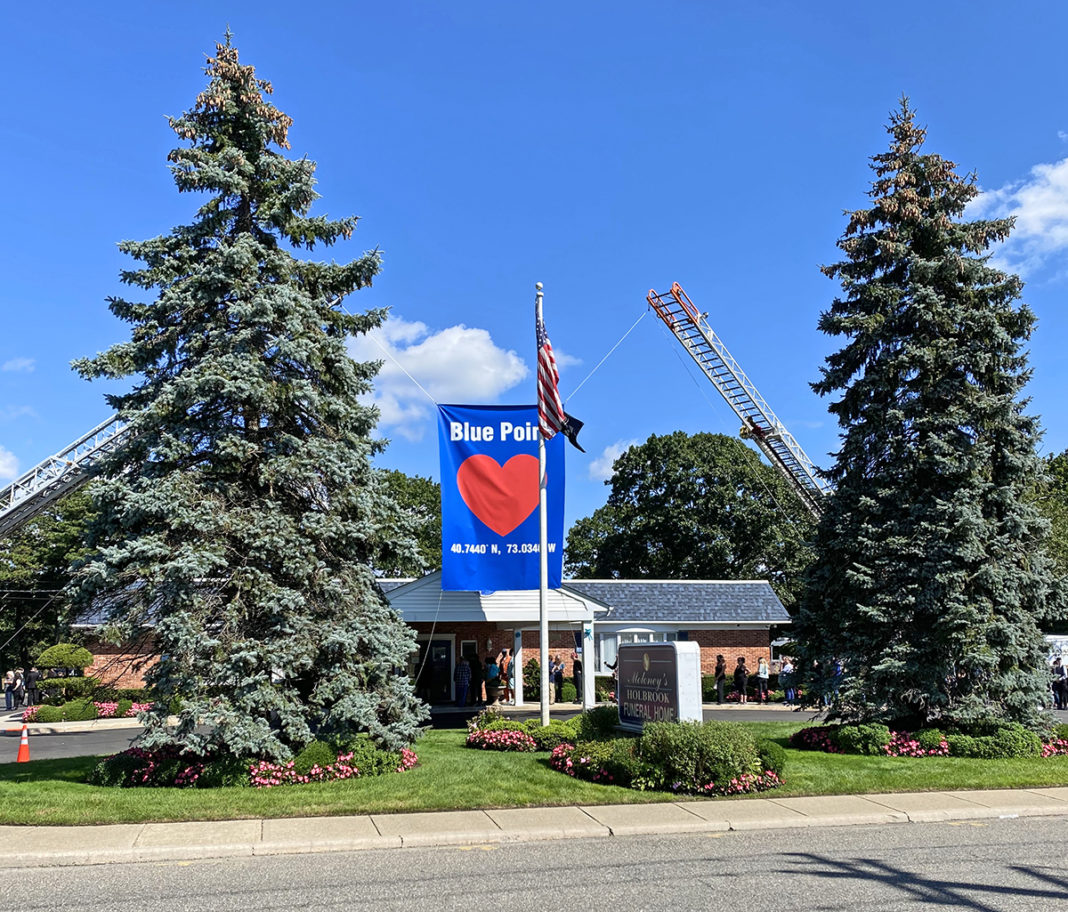 Gabby Petito is a name everyone across the country — and the world — became familiar with after the 22-year-old disappeared during a cross-country van trip with her fiancé.

After being reported missing by her mother on Sept. 11, 2021, multiple law enforcement agencies searched for Petito. Unfortunately, her remains were later found in Wyoming on Sept. 19.

Back in New York, Petito’s family called upon Moloney Family Funeral Homes for help. The Moloney name was not new to the family — other members of the Petito family had used their services before.

“We were humbled that the family chose us to serve them,” said Peter G. Moloney, who is a co-owner of the multi-location firm with his brother, F. Daniel Moloney Jr.

Two days after the family called, they met with Peter’s son, fourth-generation Funeral Director Connor Moloney. The family permitted them to post the service date and time on their website, and from then on, the momentum was unstoppable.

“As soon as we posted it, the media started calling us,” Connor said. “Once they found out, they jumped on it. They were calling us nonstop.”

The planning for the services started right away. The same day the firm received the call, the Moloneys started gathering their team, including Dan’s daughter, fourth-generation Funeral Director Danielle Moloney-Hassett, and Funeral Director Nicholas Wheeler, who is Peter and Dan’s nephew.

The Moloneys and their team chose to focus on anticipating all potential problems that could arise and repeatedly asked each other “what if?”

“We started talking about how we could exceed expectations — how our organization could represent not only ourselves but the funeral profession in the highest regard. We took that really seriously on how important this was. First, because we didn’t want the family to suffer any more than they already had. If anything went badly, we didn’t want to add another black eye for the funeral profession,” Peter said. “We left no stone unturned to ensure a seamless ceremony for the family, and there weren’t any issues.”

Connor said each staff member was assigned a specific role and understood what they needed to do. He hosted multiple meetings throughout the week to communicate with his team. In all, around 16 staff members worked the services, and Connor gives credit to all of them for rising to the occasion.

“I didn’t feel much stress because of my confidence in the staff. I knew I could rely upon the teammates I had. It wouldn’t have been possible without the support and the team effort,” he said. “We communicated so well together and worked so well together, and we were able to see what we could do when we did that.”

The Petito family decided to open the services to the public, so the Moloneys prepared for visitors at their Holbrook location. They were ready to host at least 1,000 and as many as 5,000 guests, which was the estimate given to them by local officials. Ultimately, over 1,500 people visited their funeral home throughout the day, including some guests who flew in from across the country to pay their respects.

“We felt that this was our opportunity to show the value of having a ceremony,” Peter said. “The family needed it, and community needed it, but it also demonstrates the value of gathering people together to support one another.”

The visitation was open to the public from 12 to 5 p.m. The staff concentrated on making sure guests could flow in and out of the chapel as easily as possible by setting up stanchions within the space. Around 30 to 40 guests were allowed inside at a time, but family and friends gathered in a separate space within the chapel. The staff also set up refreshments and food in a private room so family members could have a place to take a break.

“The room was set up perfectly for the event,” Peter said. “Everybody had a hand in making sure this went off perfectly.”

The Moloneys also set up an outdoor memorial tent on their North Lawn with multiple chairs for guests who did not want to go inside or wait in line. The front and back of the prayer cards were enlarged and displayed under the tent, which included a space where guests could leave flowers and pay their respects.

However, the outpouring of support wasn’t just expressed by the guests who showed up in person. Thousands watched the service online — the livestream of the services now has over 279,000 views. With thousands more users accessing the website daily, the Moloneys needed extra technical support.

That’s where Courtney Gould Miller, CSO and Head of Digital for MKJ Marketing, came in to help. MKJ’s team of website specialists ensured the website could support the overwhelming uptick in traffic as thousands paid their respects to Petito on the Moloney website and viewed the livestream.

“Without Courtney and her team at MKJ Marketing on the backend trying to solve the problems that arose — the volume — it could have been a disaster,” Peter said. “They helped us figure out how to get it done and how to get it right from the beginning.”

The Moloneys have been through other high-profile, media-heavy events before and knew to control their presence out of respect to the family but also take care of the media to support what they have to do.

“We reserved an ample area across the street to protect the family, of course, and those paying their respects. But we made sure they had a water cooler and any other things they needed, including updates according to the family’s wishes,” Peter said. “We attend seminars all the time to stay abreast of how to properly manage high-profile situations like this. When the situation presents itself, you are ready. There is no time to get prepared then.”

Ahead of the service, the firm also allowed one local TV station inside their funeral home — but not the chapel — the day before the service to go over what the community could expect regarding road closures, facility access, and wait times.

The Moloneys also had additional staff members answering phones, which were ringing off the hook with questions from the community and the media. Calls were even coming in from France, Ireland, and Australia. Staff members were given a hard card with all the service information on it to ensure everyone was giving out consistent information to those who called.

All calls from civic organizations and media outlets were funneled to Connor. His main priority was to ensure the family’s privacy, and he consulted with the family’s attorney multiple times a day for guidance.

“It was a challenge, and the entire team came together. It was great being able to accomplish this,” Connor said.

Following the end of the services, the staff went to dinner and decompressed together, sharing their experiences from throughout the day.

“Everybody was very proud to be able to serve this family and serve the funeral profession well,” Peter said. “I feel that the Moloneys’ staff put the best foot forward to represent the industry.”

Connor is in his fourth year as a licensed funeral director. He’s had to navigate a lot of different circumstances so far during his career, including the global pandemic.

When it comes down to it, Connor knows that despite all the curveballs that have been thrown his way, he understands what matters most.

“Even through COVID, you may be tired, you may be exhausted, but you’re here for a reason. You’re here to help these people and to try to make this process as easy as possible for our families. That’s my goal with every family. With Gabby’s family, it was the same goal, but it was just on a bigger scale. It’s about keeping the families’ wishes in mind and making sure that you do the best for them. It motivates you to do your best and do the best for your families,” Connor said.

According to Peter, funeral service is not just a job for the Moloney family.