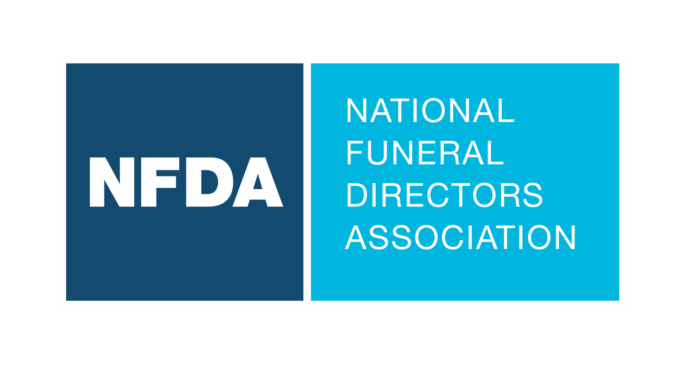 Brookfield, WI — As the world continues to answer the question, “What’s next?” after the COVID-19 pandemic, funeral service professionals gathered October 9-12 in Baltimore, Maryland, for the 2022 National Funeral Directors Association (NFDA) International Convention & Expo to find the answers.

The NFDA convention proved to be an impactful experience for all who were able to attend. To help attendees build upon their foundation of skills, NFDA offered more than 30 engaging education sessions and four preconvention seminars that addressed technical skills; business management; the value of ceremony; marketing and community outreach; grief and bereavement; and more. The sessions offered tangible takeaways to help funeral professionals better understand the evolving needs of families and build thriving businesses.

In addition, NFDA featured three enlightening and inspiring keynote speakers. On Monday, Kindra Hall, whose talk was sponsored by Homesteaders Solutions, shared strategies for using storytelling to connect with consumers and build a funeral home’s brand in the community. Sergeant Dakota Meyer’s talk during the Tuesday general session was sponsored by Carriage Services. Meyer, a Marine Corps veteran and Medal of Honor recipient, shared stories from his military career to illustrate what it takes to survive, thrive, and tackle your biggest obstacles. John O’Leary, whose keynote address was sponsored by Funeral Directors Life, brought the convention to a motivating close. Burned on 100% of his body as a child and given less than a 1% chance of survival, no one would have blamed him for giving up. Thanks to a few influential people he met after his accident, O’Leary learned to cultivate a positive attitude and a sense of gratitude and love that has helped him live an incredible life despite the challenges he continues to face.

The Expo Hall was a highlight for many attendees because, in addition to connecting with their valued supplier partners, they also discovered new products and services they can offer to families in their communities.

Whether attendees donned neon clothing and took a trip down memory lane during the lively, 1980s-themed Welcome Party, tried their hand at axe-throwing during the Funeral Directors Under 40 Party at Kraken Axes, or explored the mysteries of the ocean during the Closing Celebration at the National Aquarium, attendees had many opportunities to network and have fun with colleagues and friends while enjoying just a few of the sights and sounds of Baltimore.

The Welcome Party was sponsored by Batesville and Legacy.com. Messenger, NOMIS Publications Inc., and Dell Technologies sponsored the Closing Celebration.

2022 Professional Women’s Conference attendees and those interested in learning more about the conference came together for the first-ever PWC ReConnect, sponsored by NGL, for the chance to visit with friends and meet new ones. More than 130 people gathered to continue conversations from the 2022 conference in Miami. Conference speaker Annette March-Grier spoke briefly about Baltimore’s Roberta’s House, introduced volunteers from that grief center who shared the impact of their work, and invited those in attendance to join a tour of the center later during Convention week.

Giving Back to Baltimore

Thirteen volunteers – members, nonmembers and exhibitors – traded shared their suits and trocars for jeans and paint brushes to help make the dream of home ownership a reality for a local family by volunteering at a Habitat for Humanity of the Chesapeake build site just a few miles north of the convention center. This year’s volunteers helped apply primer to the walls and ceiling, removed a tree stump, applied caulk to windows and more.

Honoring the Care and Compassion of Funeral Directors

Located approximately 100 miles east of Baltimore is Dover Air Force Base, which is home to the Department of Defense’s largest aerial port and approximately 11,000 Airmen and joint service members, civilians and families. It is also home to Air Force Mortuary Affairs Operations, which is charged with fulfilling the nation’s sacred commitment of ensuring dignity, honor and respect to the fallen, and care, service and support to their families.

During the 2022 Service of Remembrance, with the help of the Dignified Transfer and Military Honors Teams, NFDA explored the customs associated with honoring the lives of our fallen heroes. Attendees learned these and other traditions, and their importance to families of the fallen, from Col. Chip Hollinger, commander, Air Force Mortuary Operations.

As attendees witnessed simulated dignified transfer and military honors ceremonies, NFDA also paid tribute to members of the NFDA family who died this past year during the Service of Remembrance.

At the conclusion of this year’s Service of Remembrance, a collection was taken up for Roberta’s House, a family grief support center in Baltimore. Through the generosity of convention attendees, $2,118 was donated to the organization. NFDA thanks Messenger for the gifts presented to individuals who experienced the death of a loved one during the past year and Tukios for a video tribute.

During the Opening General Session, NFDA presented the 2022 Innovation Award to Everything After. Coming in second place was the KeepTrackTM system by Gather; and Ecorial® by The Living Urn took third place. Established in 2009, the NFDA Innovation Award recognizes and promotes creativity, innovation and excellence among funeral service suppliers and vendors.

During the Closing General Session on Wednesday, NFDA also gave out fabulous prizes to attendees in the Great Big Giveaway. During Expo Hall hours on Wednesday morning, convention attendees could visit the booths of NFDA’s valued sponsors to enter for a chance to win. Attendees had to be present to win. The winners were:

NFDA has posted select videos – the installation of the 2022-23 Board of Directors, the Service of Remembrance, All-Star Recognition Ceremony, Wednesday’s general session with keynote speaker John O’Leary and the “smiling faces” video – on the “Highlights” page at www.nfda.org/Baltimore.

Professional photographers captured all of the excitement of the 2022 NFDA Convention. All of the photos can be viewed at www.nfda.org/BaltimorePics. Attendees may download as many photos as they like at no charge.

The 2023 NFDA International Convention & Expo will take place September 10-13, 2023, in Las Vegas, Nevada, a city that continues to build upon its reputation as a vibrant showcase for the extraordinary.

A host of fine dining and lifestyle magazines – including Bon Appetit, Wine Spectator, Gourmet and Esquire – have honored Las Vegas for its fantastic fare and hailed individual restaurants for their exquisite cuisine, created by the likes of Hubert Keller, Guy Savoy, Emeril Lagasse, and Wolfgang Puck. But, if an attendee is craving a burger and fries, Vegas has them covered too!

The city famous for having “something for everyone” furthers the proof to its claim when the sun goes down. Some of the world’s most exciting and versatile entertainers have performed here including Gwen Stefani, Jerry Seinfeld, Lady Gaga, and so many more. Guests can also experience a variety of night spots with personalities as varied as their own. From a wave of upscale “ultra lounges” to comedy clubs, music venues, and intimate craft cocktail bars, there are endless ways to experience Las Vegas at night.

Learn more about all that Las Vegas has to offer at www.visitlasvegas.com. Registration and housing for the 2023 NFDA Convention will open in Spring 2023 at www.nfda.org/convention.

NFDA thanks its 2022 International Convention & Expo sponsors for their continued support: